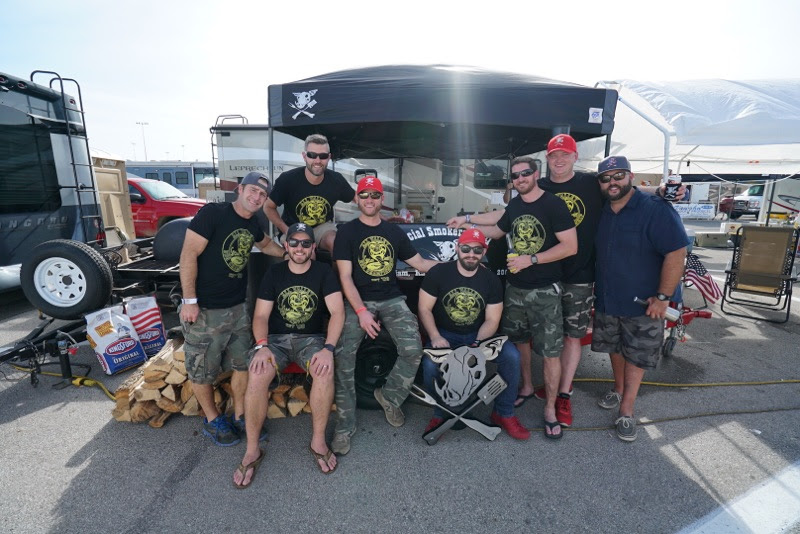 The American Royal BBQ coming to an end means another season is in the books for Social Smokers BBQ.  Needless to say, it was our best season yet.

Finally, the boys in black and red got ourselves our elusive first ever Grand Championship.

Boy was that an amazing feeling. With that contest (Lansing, KS) being a State Championship; we were able to fulfill another of our team goals: to compete in the Invitational competition at the American Royal BBQ.

Testing ourselves against the best teams in the world is something we have been fighting to do since we got onto the competition scene 7 years ago. Granted; living in the Mecca of BBQ, we face extremely tough competition every weekend we compete, but there is something special about getting that invite.

It was an honor to compete against teams from Australia, South Africa, Japan, and of course the good ‘ole U.S. of A.  While we didn’t finish in the Top 10 in anything, we had an amazing time and really came together as a team to put together one of our most streamlined cooks of our careers.

Everything seemed to go smoothly.  Our best finish was 48th in ribs, which against that caliber of competition…  we’ll take it.  Being 9 guys who are extremely competitive in nature, of course we wanted 1st place calls in everything.  But sometimes the cards just don’t fall in your favor.

With cooking both days (Invitational and Open competitions) this was our first year that we haven’t thrown a big party.  In the past, we’ve had upwards of 600 people at our party, along with catering a 500 person corporate party at the same time.  So this year, it was nice to relax and take a look back on an amazing season.  OK..  full disclosure: we partied pretty hard on Friday night.  But at least we didn’t have to clean up a couple thousand red solo cups from our spot in the morning.

As far as the new venue goes: we loved it.  Not JUST because the Speedway is a perfect place to run an RC car around the track that can hit speeds of 60mph..  But we thought the setup was great, it was easy to get around, easy for families and friends to get in, and it was just a really cool backdrop for the competition.

Overall it was a phenomenal few days hanging out with the boys and cooking some exceptional BBQ. It really doesn’t get a whole lot better than that.

We now count the days until we get back behind the pit and start another amazing Social Smokers BBQ season.

In the meantime; someone tell the Invitational we’re coming back for her…  And we’re going to win.

Get discounts, special recipes and how to’s directly to your inbox. Members receive lifetime FREE SHIPPING!